MEET OUR TOP SCHOLARSHIP WINNERS FOR 2014 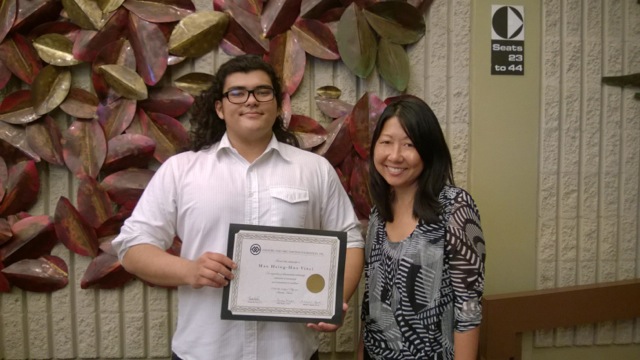 The Mamoru and Aiko Takitani Foundation, Inc. has awarded $98,000 in scholarships to 62 exceptional seniors from every qualifying public and independent high school in Hawaii. Two students received Distinguished Student Awards of $10,000 each and a third student received an Outstanding Student Award of $5,000. Seven high school seniors received $3,000 scholarships as district finalists and 52 additional students were awarded $1,000 scholarships. Nominated by their respective schools, the award winners received scholarships based on their strong academic achievement, dedicated community service and financial need.
• Max Hsing-Huo Vinci of James B. Castle High School was the recipient of the Mamoru Takitani Distinguished Student Award of $10,000 and plans to attend Occidental University in September to study Astronomy, Astrophysics, and Planetary Science. He is the son of Robert and Glenda Vinci of Kaneohe.

• Erica Shin of Kalani High School was the recipient of the Aiko Takitani Distinguished Student Award of $10,000. Erica, the daughter of Scott and Unchong Shin of Honolulu, will enroll at the University of Hawaii – Manoa to pursue a career in medicine.

• Kelly Merrell of Admiral Arthur A. Radford High School was the recipient of the Karen Uno Outstanding Student Award of $5,000 and will pursue a degree in Biochemistry and a minor in Psychology at Auburn University in the fall.

District Finalists and recipients of $3,000 scholarships are as follows:

• Maria Andrea Jurado of Waipahu High School. She is the daughter of Andrew and Mary Grace Jurado.

• Sullivan Schuster of West Hawaii Explorations Academy. She is the daughter of Henry and Rebecca Schuster.

• Maile Naito of King Kekaulike High School. She is the daughter of Masato and Yoko Naito.

• Lani-Rae Green of Waimea High School. She is the daughter of Jerry and Yuka Green.

• Damien Farrant of Kamehameha Schools Kapalama. He is the son of Laurence and Kimberly Farrant,

• Santana Huck of Maui Preparatory Academy. He is the son of Markus and Erika Huck.

• Darren Zhao of Damien Memorial School. He is the son of Rui Zhong Zhao and Xiu Cai Zhou.

“Mr. and Mrs. Takitani’s legacy of commitment, dedication and generosity is honored each year through the Mamoru and Aiko Takitani Foundation Scholarship Program,” said KSSK Radio personality Michael W. Perry, Chairman of the Board of the Takitani Foundation. “The Takitanis knew hard work, innovation and commitment to excellence were key factors in their success with Hawaiian Host, and wanted to recognize those same qualities in Hawaii’s outstanding students with the opportunity to further their education.”

Mamoru and Aiko Takitani founded Hawaiian Host, Inc., manufacturer of Hawaiian Host chocolates, and established the Mamoru and Aiko Takitani Foundation, Inc. to express their appreciation to the community by providing the gift of education to the young people of Hawaii. Since 1993, the Foundation has annually presented scholarships to an outstanding student from every qualifying high school in the state and has awarded over $1.9 million in scholarships.